This post is about my experience with the Uberman (UM) sleep schedule, the popularized and extreme polyphasic sleep schedule that achieves 2-3 hours of total daily sleep through periodic 20 minutes naps. The benefits are enticing. Assuming you currently sleep 8 hours/day and follow the 3 hours/day schedule, you can have 21 more hours a week to enjoy and to get stuff done. With all that extra time, surely I’d be able to get through my to-do backlog! The requirements – a flexible work schedule and a two-week adaptation period during which you are a brain-dead zombie – are steep though, which is why I didn’t give UM any serious consideration until recently. UM success stories1 would pop up a few times a year and the idea stayed in the back of my mind. Finally a change in my job’s working hours (with a 5 week break in-between the transition) gave me an opportune window to adjust to and potentially stick with the schedule.

First things first, it was time to do some thinking and research. Why do I want to try the UM sleep schedule and how can I accomplish this?

Reasons I want to try UM

After evaluating my reasons for pursuing UM, I did some reading on what other people did and their experiences with the schedule. Apparently this UM thing is a scam… The majority of people fail to adapt from either lack of motivation or technique 234. Those that were able to successfully adapt stopped because of social obligations 56 or perhaps fundamental human incompatibility with the schedule7.

Using the recommendations on PolyphasicSociety.com, I settled on this plan for adapting to UM and decided to stick with the UM schedule for 6 weeks then evaluate whether I wanted to continue:

I went on a lot about productivity above, but I anticipated that I would spend a lot of time just watching TV in a struggle to stay awake.

You can see that I didn’t follow the schedule very well and never adapted to UM. This is because excuse1, excuse2, …, excuse99. The adjustment period was rough, and because I never adapted to the schedule, the entire 6 weeks was an adjustment period. I expected that my physical and mental faculties would be compromised by sleep deprivation during this experiment, but I was still surprised by the extent to which they were.

In particular, there were three events that stood out as prime examples of sleep deprivation

For some reason, I naively assumed I would have enough time to get to everything on my to-do list. A moment’s calculation reveals this to be ridiculous because it would have taken 527 hours or 21.9 days to watch my anime/movie/TV backlog alone. 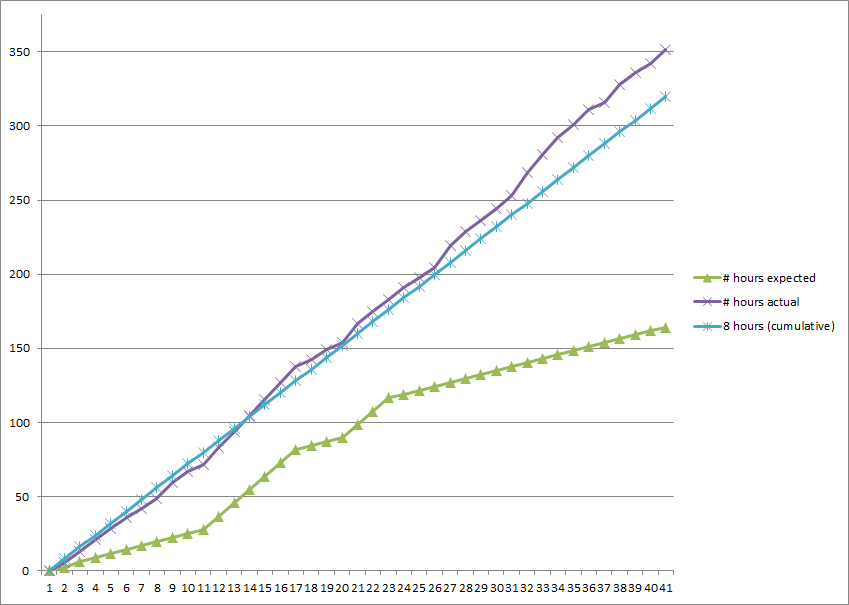 Ironically, not only did I not accomplish much work during these 6 weeks because of sleep deprivation, I actually slept more hours total than I would have normally. Woe is me.

These 6 weeks were a generally unpleasant time. Even so, if given the choice, I would try UM again because it satisfied a long-standing curiosity and let me feel – and not just know – how devastating sleep deprivation can be. I also gave myself a reminder that increasing productivity is really about effective energy management and not time management. I have enough time to do the things I want; I don’t have the habits, discipline, and energy to avoid squandering my free time.

At some point in the future, I will probably try that Everyman schedule I was originally eyeing, but not too soon.

I leave you with a quote from Manhole 69, a J.G. Ballard short story about an experimental surgery to eliminate the ability to sleep that I coincidentally happened to read during this time:

Continual consciousness is more than the brain can stand. Any signal repeated often enough eventually loses its meaning. Try saying the word “sleep” fifty times. After a point the brain’s self-awareness dulls. It’s no longer able to grasp who or why it is, and it rides adrift.